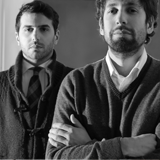 Sandro Meneghello and Marco Paolelli, both born in 1979, graduated at the Politecnico di Milano, Faculty of Design, in 2004, under the guidance of Roberto Palomba and Paolo Rizzatto. They separately gather different international experiencies: from Central Saint Martins College in London and Norwegian University of Science&Technology in Trondheim to Köln Kisd University and EDF R&B in Paris, before starting their studio in Milan.

“ Our studio is young, fast-moving and always on the look out for new vibes in this sector or others, always putting ourselves to the test. We learnt to walk in the bathroom area, you could say, we’ve grown up there and now we are starting to step out into the living areas and lighting. We want to go further, we’ve only just started: we’ve expanded the studio over the last few years and we know where we’re headed. International acclaim (apart from the feel good factor) has taught us that our work is appreciated and is a great calling card for swapping from one field to another. In a certain sense, we are using our creativity to pay the bathroom sector back for the faith its shown in us from the start ”.